On April 18, 2018, The Sierra Fund Board and staff welcomed over 100 influential guests to the Citizen Hotel in downtown Sacramento for our 10th Annual Legislative Reception. This year’s event was a special celebration commemorating the release of TSF’s first report ten years ago, Mining’s Toxic Legacy, to a joint hearing of three Assembly Committees: Environmental Safety and Toxic Materials, Natural Resources and Water, Parks and Wildlife.

Mining’s Toxic Legacy took a comprehensive look at the lasting impacts of the California Gold Rush on the lands, people and waters of the state. These Assembly Committees each have a mandate to address aspects of legacy Gold Rush issues, and in 2008 they joined together to develop policy solutions for centuries-old problems.

At the evening reception, The Sierra Fund acknowledged the former- and current Chairs of the three Committees with our Golden Pinecone Award for their commitment to protecting California’s watersheds.

Assembly Member Eduardo Garcia, and retired CA State Senators Loni Hancock and Lois Wolk, accepted their awards in person and addressed the crowd to urge continued dedication to legacy issues, particularly in the face of the emerging and urgent disturbances associated with climate change. Staff representatives for Assembly Member Bill Quirk and Congressman Jared Huffman graciously attended and spoke on their behalf.

In a special announcement, Secretary for Resources (and former TSF Board Member) John Laird welcomed a new member to The Sierra Fund’s Board of Directors, California State Assemblymember (Retired) Rich Gordon, who had been seated just hours before. Assembly Member Brian Dahle joined in welcoming his former colleague as well. 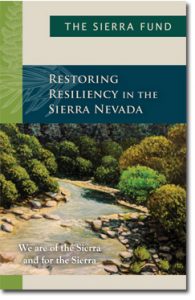 At the event, The Sierra Fund released our new organizational brochure, describing our strategy to increase investment in the Sierra Nevada in order to increase the resiliency of California’s headwaters, to the benefit of the whole state.

In addition, we unveiled our new banner “10 Years For The Sierra,” with photographs and captions describing major milestones since the release of Mining’s Toxic Legacy that represent successes in the movement to restore resiliency to the Sierra following the Gold Rush era of extraction.

Thank you to all who joined us to recognize the hard work of the last 10 years, and to build momentum around the next decade of collaborative advancements to protect and restore California’s headwaters.

Thank you to the following sponsors for their generous support: