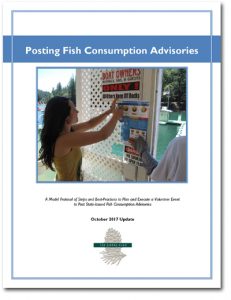 The Sierra Fund is pleased to share this model protocol, outlining the steps and best-practices to plan and execute a volunteer event to post state-issued fish consumption advisories. We hope the Protocol will encourage agencies and organizations statewide to launch fish advisory posting efforts in their region in order to reduce human exposure to mercury. We plan to present the Protocol in Sierra watersheds impacted by historic gold mining, as well as in communities affected by legacy mercury mines on California’s Coast Range.

The Protocol is informed by three consecutive years of hosting our “Post It Day” event, a volunteer-powered effort to post fish consumption advisories at popular fishing locations in our region. Since 2015, 60 volunteers have directly posted nearly 100 locations at over 20 water bodies in five watersheds in the Sierra Nevada. Of these, nine target waterbodies have been posted with advice in both Spanish and English.

About Fish Consumption Advisories
Fish consumption advisories are published by the Office of Environmental Health Hazard Assessment (OEHHA) and offer healthy eating guidelines for different species of wild-caught fish based on the level of contamination. Advisory information is communicated in terms of species, demographic group, and the recommended maximum number of meals of mercury-contaminated fish species that can safely be eaten per week or month. To learn more about fish consumption advisories, visit www.oehha.ca.gov/fish.

Mercury in the Sierra
Mercury was introduced to the Sierra Nevada during the California Gold Rush to aid in gold recovery processes. Of the 26 million pounds of mercury brought to the region, it is estimated that between 10 – 30% was lost to the environment. In aquatic ecosystems, liquid elemental mercury is converted to a form called methylmercury, which then both bioaccumulates and biomagnifies as it moves up through the trophic levels from algae to macroinvertebrates, prey fish, predatory fish and humans who eat them.

Mercury and Human Health
Consumption of contaminated fish is the main route of human exposure to mercury. Mercury is a developmental neurotoxin that can cause serious and irreversible damage to the brain and nervous system. Women of childbearing age and children are considered sensitive populations to the impacts of mercury in the human body. Fish consumption advisories address this elevated risk by recommending more protective consumption guidelines for this demographic, and by recommending that women and children avoid eating high-mercury fish altogether. Posting fish consumption advisories is a strategy used by public health agencies to limit human exposure to mercury-contaminated fish.