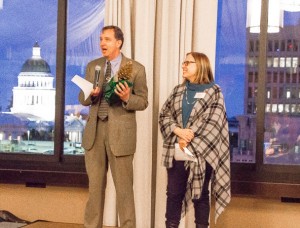 Check out more photos from the event here

The Sierra Fund CEO Izzy Martin launched the event program by highlighting The Sierra Fund’s legislative victories and other work over the last year that was made possible by a broad range of supporters dedicated to the Sierra.

The awardees received The Sierra Fund’s signature golden pinecone award, which was accepted by Senator Allen in person,  for Assemblymember Rendon by his Legislative Director Alf Brandt, and by Secretary for Natural Resources John Laird for Governor Brown, who had hoped to attend the event before being called out of town.

Additionally, The Sierra Fund Board presented an award to CEO Elizabeth “Izzy” Martin, honoring her for her 12 years of dedicated leadership of The Sierra Fund and successful advocacy for Sierra causes, which has also recently earned her recognition by the James Irvine Foundation as one of California’s most innovative leaders.

This reception was made possible by the generous support of the following  sponsors: Sorensen’s Resort, John and Patty Brissenden, Michael and Alicia Funk, Teichert Materials, Nevada Irrigation District and the South Yuba River Citizens League.