May 19, 2011 – As sunshine and warm breezes finally reach the Sierra Nevada Foothills, anglers across California reach for fishing poles, line, bait, and tackle.  And as people head to their favorite fishing holes, half have one other thing on their mind:  dinner.

According to the Gold Country Angler Survey, a new study by The Sierra Fund, 47% of anglers at Sierra water bodies plan to eat what they catch that day, and 92% report eating locally caught fish sometime in the last year.

In a region with a legacy of mercury pollution from historic gold mining, these findings are cause for concern, according to CEO of The Sierra Fund, Elizabeth Martin.  “Millions of pounds of mercury were dumped into Sierra rivers and streams in the mining days.  Today, it’s still there in reservoirs, lakes and river beds.  The greatest concern we have is for human health, because the way people are exposed to mercury is by eating fish caught from these areas.”

Although mercury exposure is dangerous for everyone, it is especially harmful to children and developing fetuses, so children and women of child-bearing age need to be careful to avoid eating fish high in mercury.  The California Office of Environmental Health Hazard Assessment issues safe eating guidelines for mercury in fish—but for lakes and reservoirs in the Sierra, there are few guidelines issued and almost none are posted at fishing locations. 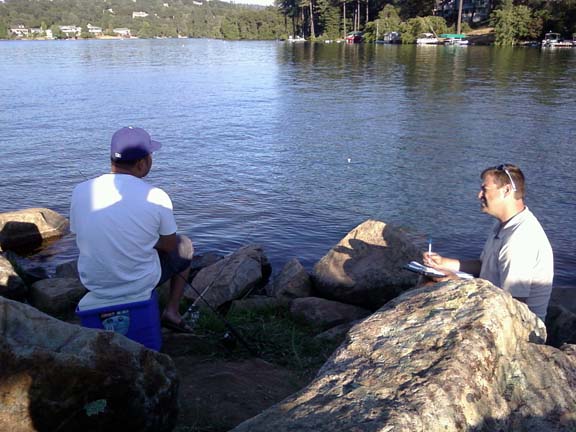 “We conducted the Gold Country Angler Survey because we saw a problem,” says Science Director Dr. Carrie Monohan:  “people were fishing at areas that we know are high in mercury, and there was so little information available to them about which fish were safe to eat.  We needed to ask questions—Were they eating the fish they caught?  What kinds were they eating and how much?  How much did they know about health issues associated with mercury in fish?  The answers we got show a problem.”

In 2009 and 2010, people were interviewed at popular fishing locations within two hours of Grass Valley.  Results of over 150 interviews indicate that the vast majority of people are consuming locally-caught sport fish from mercury-contaminated waterways, some in amounts that exceed safe levels, and that they have limited understanding of the health hazards from eating mercury-contaminated fish.

These findings indicate the need for action to address these problems.  Key recommendations from this study include:

Although there is still more information to be gathered on these issues, the message for Sierra anglers is clear:  in the face of extensive mercury contamination, everyone eating fish from the Sierra needs to make educated choices about what kinds of fish they eat.

Ready for more information?  Go to: