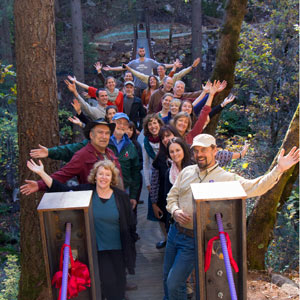 Last month, The Sierra Fund hosted a powerful and well attended opening ceremony for the Nisenan Tribute Site, the newest addition to Nevada City’s Deer Creek Tribute Trail system. The event, held October 28, 2014 was centered around a ceremony by the Foothills Nisenan Nevada City Rancheria, and also included presentations from project partners, detailing the guiding vision and personal significance of the project to various project participants. With over 125 attendees, we were gratified by the turnout for the event.

This newest section and connecting bridge pays tribute to the Nisenan people of the Nevada City Rancheria, the original people of this area, who were honored at the October 28th opening celebration. The bridge is named Angkula Seo to reflect the traditional name for Deer Creek used by the local Nisenan People, and the surrounding area is called the Nisenan Tribute Site, which includes native plans and petroglyphs in recognition of the Nisenan people. The celebration was opened with a ceremony by elders and members of the Nevada City Rancheria, led by Shelly Covert, tribal secretary. An offering of sacred songs, sage, tobacco and mugwort were given to the creek in order to replenish the feminine energy in an ecosystem depleted by years of mining, which is considered to be a hyper-masculine activity.

The ribbon-cutting was performed by Nevada City Rancheria Tribal Chairman Richard Johnson, accompanied by special guests California Secretary of Resources, John Laird, and Assemblyman Brian Dahle. The Sierra Fund was honored to have in attendance Sierra County Supervisor Lee Adams, Nevada City Mayor Terri Andersen, as well as Nevada City Council Members, Nevada County Supervisors, and Nevada Irrigation District leadership. Also present was Martin Walz, representing Seattle Bridge LLC, the company that designed and built the suspension bridge. He was able to answer questions about how the bridge was installed without disturbing the creek or its banks.

This project was funded through grants from the California Resources Agency River Parkways Program and the CalTrans Environmental Enhancement and Mitigation Program. The project was led by The Sierra Fund, and made possible by the collaboration and hard work of the Foothill Nisenan of the Nevada City Rancheria, City of Nevada City, Forest Trails Alliance, American Rivers, and Sierra Streams Institute.