The Deer Creek Tribute Trail is a trail network being developed around the Nevada City area.  These trails not only pay tribute to history and local landmarks but also increase recreation opportunities and fire safety for our community.  The lower Chinese Bridge loop, Hirschman’s Pond, and the Environs are examples of great trail projects the city has supported.

One of the most significant recent additions to the trail network is the new trail and 150 ft suspension bridge that crosses Deer Creek on property belonging to Nevada City, connecting two existing trail loops.   This bridge and trail honor the Nisenan People, the original people of this area.

As reported in the Union 9/19, the project is almost—but not quite—done.  Final design elements and signage still need to be installed, final inspection of the project must be completed by all parties, and other details remain to be settled.  An “opening ceremony” is planned for the last week of October, with dates to be announced. 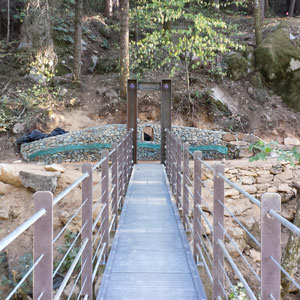 The bridge itself, and the trails connecting it to the larger Tribute Trail system, is built.  The Sierra Fund, the project’s fiscal sponsor and coordinator, hired Seattle Bridge Company last fall to design and install the bridge.  Holdrege & Kull, a local engineering firm, did the beautiful engineering design.  The Nevada Irrigation District access road provided excellent staging to shift materials to both sides.

Vegetation management, restoration and fire safety aspects of the project are also complete.  American Rivers oversaw the thinning of vegetation and removal of invasive species on the City’s parcels, as well as the replanting of native, drought resistant plants supplied by the Foothill Nisenan of the Nevada City Rancheria. The result is a stunning, fire safe landscape. 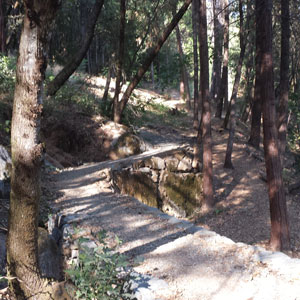 Another amazing element of the project is the trail itself which was created by local organization Forest Trails Alliance.  Although less than a quarter mile in length, the trail winds through intense granite bedrock outcrops on steep slopes (that most would have preferred a climbing harness to navigate prior to the trail being built).  The route meanders slowly down to a magnificent ledge of rock that projects out above the creek four stories below, where the suspension bridge tethers to another matching outcropping on the other side.  The trail is a work of art featuring engineered structural stone walls made from locally quarried basalt, color stratified and outfitted with antique found items and obscure niches adjacent a stone arched bridge–some of the calling cards of Forest Trails Alliance.  This local non-profit trail building organization is becoming a well-known name nationally among trail builders and land managers alike.  Among the trail design details was the transformation of a 20 ft exposed culvert that was positioned above the trail into a cedar log.

The southern side of the bridge lands on a vertical cliff and the trail immediately turns to hug the cliff as it winds around a 150 year old Pacific Yew Tree.  Another engineered wall was constructed against the bedrock utilizing native granite.   Forest Trails Alliance, with support from Seattle Bridge Company ziplined an excavator across the creek to scratch a pad.  The rest of the concrete, rebar, tools and stone were also ferried back and forth on 250 ft cables.

Partners in this collaborative project include: Nevada City, The Sierra Fund, American Rivers, Foothill Nisenan of the Nevada City Rancheria, Sierra Streams Institute and Forest Trails Alliance.  The project is made possible by funding from voter-approved Proposition 84 bond funds, through a grant from the California Resources Agency River Parkways Program.

Forest Trails Alliance has already begun to extend the trail system around the bridge to allow hikers closer access to the Creek.  This beautiful addition was completed in record time (before what everyone hopes is a rainy season).  Additional funds to pay for this lovely addition are being solicited by the Forest Trails Alliance (check their website at www.foresttrailsalliance.org for details).