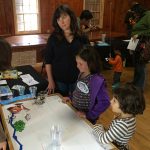 Fishing for fun and finding facts was the theme of a family event held at Seaman’s Lodge on Saturday May 21. This event focused on increasing public information about mercury in fish two different ways. During the afternoon at Pioneer Park, a family-oriented educational event provided information on which locally caught fish are safe to eat and which are better caught and then released due to high mercury. Meanwhile, teams of community volunteers traveled to local water bodies to post state-issued fish consumption advisories so anglers would have access to this information during the summer fishing season.

This educational event was a collaborative effort of three local organizations, The Sierra Fund, South Yuba River Citizens League and Wolf Creek Community Alliance. Several other local organizations and agencies participated by having a booth including the US Forest Service, Gold Country Fly Fishers, Trout Unlimited and the Upper American River Foundation.

Fishing for Fun: A Family Affair

Twenty kids joined in on age-appropriate activities and games and had a chance to test their new knowledge of which fish are safe to eat through trivia, in exchange for entry to a raffle with prizes donated by local businesses. Meanwhile, teens and parents had an opportunity to talk with experts about fishing locations, the history of mercury in our area, efforts underway to clean it up, and how to protect their family by choosing which fish to eat.

Magnetic fishing poles gave kids the chance to catch different species of native California fish and determine which are safest to eat. Other children learned about how mercury attracts (amalgamates) gold by playing with silver and gold colored magnets. Another game used marbles to demonstrate how mercury concentrations increase at higher levels in the food chain. Raffle tickets were awarded to children that completed each learning game, and a number of prizes donated from local merchants were won by many lucky raffle ticket holders.

Ice cream sundaes, with ingredients donated by local stores, were given to everyone that participated in the games and postering activities. Jackson, age 7 exclaimed, “When are we going to have a fish party like this again?”

For some locations, such as Donner Lake and Little Grass Valley Reservoir, this was the first time the sites had ever been posted with this important information. Anglers at these locations now have the information they need to make smart decisions on which fish are safe to eat and feed to their families.

The effort to improve public awareness of safe eating guidelines was augmented by the Nevada Irrigation District and the Yuba River Ranger District of the Tahoe National Forest. This year, NID and the Yuba River Ranger District agreed to post the advisories at the lakes and reservoirs they manage which constitute the majority of public fishing locations in the Bear and Yuba watersheds including Combie and Rollins Reservoirs, Scotts Flat Lake, Bowman Lakes, and the Gold Lakes Basin. Other neighboring agencies have followed suit including Placer County Water Agency which has agreed to post fish advisories at Hell Hole and French Meadows Reservoirs, and the South Feather Water and Power Agency who will post Sly Creek Reservoir.

The information contained in the fish consumption advisory, issued by California’s Office of Environmental Health Hazard Assessment (OEHHA), is important to anglers in the Sierra Nevada region because of historic mining activity which has led to elevated levels of mercury in local fish. Of the more than 26 million pounds of mercury that was brought to this region for use in processing gold during California’s Gold Rush, approximately 10 to 13 million pounds were lost to the environment and remain in our watersheds and ecosystems.

Sport fish consumption is likely the single most significant route by which people are exposed to mercury that remains in the Sierra Nevada foothills from legacy mining activity. Furthermore, some popular sport fish such as bass and brown trout can contain the highest levels of mercury, due to the way mercury enters and accumulates in the longer lived and predatory fish. OEHHA recommends limited or no consumption of these fish for children and women of childbearing age. On the other hand, rainbow trout, another popular sport fish, is generally one of the healthiest options for eating locally caught fish.

The Sierra Fund is surveying anglers now that the advisories are in place to learn about the effectiveness of the new signs. “We were so pleased by the enthusiasm of the volunteers who showed up to help us with this long-neglected public health issue,” noted Kelsey Westfall of The Sierra Fund who helped organize the event. “And it was so much fun having the families and children join us this year for the first time at the event.”