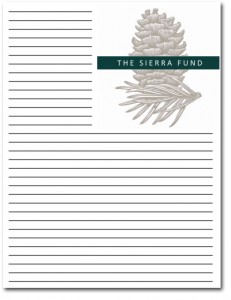 In response to several skewed opinion articles published in regional news outlets, The Sierra Fund has compiled this fully referenced piece:  “Like it or Not, Mercury in Gold Country Fish.”

An article written by The Western Mining Alliance, published in the Placerville online newspaper In El Dorado County, deceptively stated, “fish are safe to eat throughout the Sierras.” In truth, 26 million pounds of mercury were brought to this region during the Gold Rush, and at least ten million pounds of which was left behind in the environment, a legacy that still affects our environment today. People are exposed to that mercury when eating certain species of locally caught fish. The Gold Country region in California deserves a comprehensive regional study to provide the public with accurate information on how to eat fish safely.

In response, The Sierra Fund has compiled this fully referenced piece:  Like it or Not, Mercury in Gold Country Fish