Starting in 2009, The Sierra Fund has conducted surveys of people fishing at regional water bodies, to learn whether they are being exposed to mercury from eating locally caught fish.

Survey results were originally published in 2011; the full report is available here, and a 2-page executive summary is also available.  Additional surveys have been collected since that time, and an update of the report coming soon!

Millions of pounds of mercury were used in California’s Sierra Nevada’s during the Gold Rush. Much of it was lost to rivers, lakes and streams where it remains today.

Mercury is a danger to humans, especially when they eat fish from areas with mercury pollution. Mercury exposure from eating contaminated fish can cause developmental delays in children—this is why children younger than 18, women of childbearing age, and pregnant women need to avoid eating fish high in mercury.

There is limited information available to local fishermen about mercury levels in fish, despite health warnings issued by the State of California regarding the eating of fish at nearly every water body that has been tested.

In an effort to assess awareness about mercury exposure from fish in areas with historic mercury pollution, The Sierra Fund conducted a survey of local fishermen.  Trained interviewers went to popular fishing spots in the Deer Creek, Yuba, Bear and American River watersheds, and asked fishermen a series of questions about how much fish they ate, what kind, and whether they were aware of any warnings about eating fish.

Most of the fishermen ate fish that was locally caught. Many reported feeding that fish to children under 18, women of childbearing age, and to a lesser extent, pregnant women.

The most popular fish eaten were bass and trout, and bass is a species that typically has the highest levels of mercury.  As a result of high mercury contamination, bass are the subject of fish consumption advisories at many Sierra water ways, and at lakes and reservoirs throughout California. 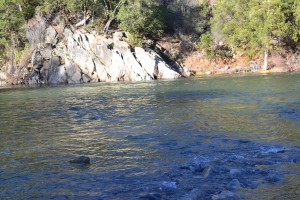 There were no posted warning signs for mercury exposure at most of the survey locations. Instead, the fishermen who answered our survey said they got health information they really trusted from their doctors. This is important because the clinics we contacted in the Sierra did not report providing information on the dangers of consuming mercury-contaminated fish, not even to their pregnant patients.

Environmental Health Outreach – The Sierra Fund’s campaign to bring information about public health exposures to legacy mining toxins to rural Sierra communities, and the doctors and nurses who serve them

Mercury Trainings for Healthcare Professionals – The Sierra Fund’s program to educate regional doctors about mercury in the human body, and how to talk to their patients about eating fish