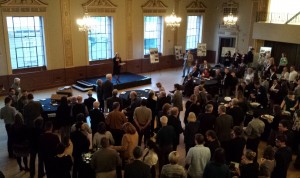 The Sierra Fund CEO and master of ceremonies, Elizabeth “Izzy” Martin, launched the evening program by highlighting The Sierra Fund’s mission and welcomed Board Chair, Timothy Seward and other board members. Sierra Nevada Conservancy’s Governing Board Chair BJ Kirwan then introduced a short tribute film about the many accomplishments and challenges that the Conservancy has faced over the last decade.

Featured speakers included the two co-authors of the legislation that created the Sierra Nevada Conservancy in 2004: current California Natural Resources Secretary John Laird and then-Senator Tim Leslie, as well as former Resources Secretary and founding Chair of the Conservancy Mike Chrisman. Mr. Laird and Senator Leslie recapped the year of negotiation to craft the final legislation that was signed by then-Governor Schwarzenegger. “I remember the night the legislation passed, and we were standing together at the informal celebration that happened immediately after the vote,” noted Secretary Laird. The bi-partisan collaboration was a rare and important element of that victory.

The Sierra Fund, a nonprofit organization based in Nevada City, CA, was established in 2001 to increase and organize investment in protecting and restoring the natural resources and communities of the Sierra Nevada through advocacy, philanthropy and strategic campaigns. The organization holds an annual event in Sacramento to raise visibility of hard working Sierra organizations and the California leaders who support them.